Most of us are aware that Samoyeds can develop glaucoma. However, since it affects a relatively low number of dogs in the breed, many people may not know much about it. Recognizing the symptoms of an acute attack, knowing it’s an emergency and what to do is critical if you are to save your dog’s eyesight. Additionally, understanding the anatomy of the eye enough to understand the cause of glaucoma is useful to both owners, who may have a dog that develops glaucoma, as well as to breeders as they work to prevent the genetic form of glaucoma. To understand glaucoma, its prognosis, and treatment you need to first know about the three different classifications; open angle; closed angle; and goniodysgenesis. You also need to know if it’s primary (genetic) or secondary (caused by another eye condition or trauma). In cases where the prevalence of a disease is small, data collection is more difficult and may seem less useful. Data collection on glaucoma is not usually separated by cause (primary or secondary), making it difficult to tell the true prevalence of this genetic issue in Samoyeds. Current information on the prevalence in Samoyeds ranges from 1 to 3 percent.

Glaucoma is defined as an abnormal rise in intraocular pressure in the eye that can lead to damage to the optic nerve. So, no matter what causes the rise in pressure it is called glaucoma. Any form of inflammation can cause glaucoma. It’s important to know that glaucoma in dogs is not like that in humans. While most human glaucoma can be medically managed it is rare in dogs for that to be the case. Glaucoma usually starts in one eye but will affect both eyes eventually.

There are 3 classifications of primary glaucoma: open-angle, closed-angle, or goniodysgenesis. Open angle (what most humans have) is due to a genetic mutation which causes the wrong protein to be coded by the gene. This leads to a slow, gradual clogging of the drainage system, rather like the kitchen sink slowly clogging over time. Open glaucoma can be detected if regular eye pressure checks are done because of the slow onset. Most dogs, unlike humans, do not have yearly eye pressure checks.

Closed angle glaucoma occurs when the drainage angle (iridocorneal angle) is too tight and fluid cannot easily drain from the eye. It can occur slowly (chronic) or very suddenly (acute). Acute onset of glaucoma is always an emergency requiring immediate medical attention.

Goniodysgenesis refers to the malformation of the trabecular mesh (pectinate ligaments) that hold the eye structures in place. This form of glaucoma will also be called closed angle as the iridocorneal angle is usually narrowed. The trabecular network that forms the suspensory ligaments is a solid sheet of tissue that separates into a spread finger-like configuration during fetal development. If this separation is not complete the openings may be smaller or sections may be closed. This reduces the drainage of fluid from the eye, rather as if the kitchen sink is malformed and has very small drain holes. The first illustration shows the components of the canine eye and the second the flow of fluid from the eye. 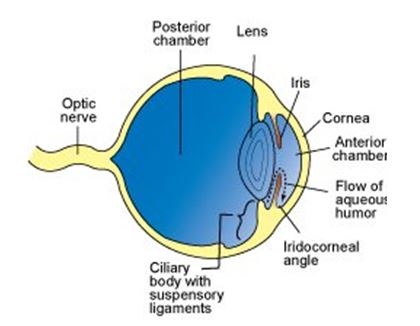 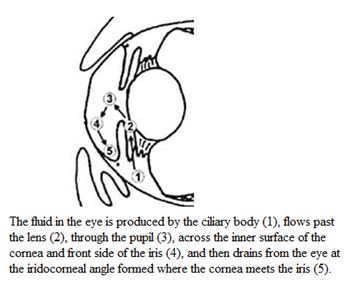 Glaucoma from goniodysgenesis is not usually diagnosed in a young dog as there is another contributing factor. The dog’s lens continues to grow and thicken as the dog ages reducing the anterior chamber depth and causing the iris to deform and close off the drainage opening. There is also a narrowing of the opening between the lens and the iris. Fluid passing through narrow areas causes turbulence and this adds to the drainage problem. The most frequent age for diagnosis is between 5 and 8, although it can occasionally occur much younger or older. 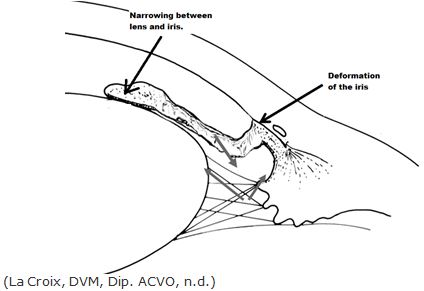 When the internal ocular pressure (IOP) rises there is tremendous pain and the process will cause the development of toxic chemicals that will reach a level that begins to cause destruction of the retinal nerve within 4 hours. This development occurs most often at dusk and so it has been called the “5 o’clock emergency”. The dog will shy away from movement towards their eye, the third eyelid will be closing, and the eye will appear bloodshot. If you are unable to reach a veterinarian that can treat the dog immediately it is possible to give glycerin and withhold all water to change the osmotic pressure in the dog’s body which will reduce the pressure in the eye. If you have a dog that may be predisposed to glaucoma you can ask your vet or vet ophthalmologist what dosage would need to be given and keep glycerin on hand.

The only way to diagnose glaucoma is by checking the internal ocular pressure (IOP). Since our breed is not prone to open angle glaucoma pressure checks prior to an acute onset of glaucoma is unlikely to be useful. Every DNA test, to date, for canine glaucoma is for open angle glaucoma BECAUSE that is caused by a gene mutation for which we can search, find, and create a test to identify dogs who have it. I fear that in goniodysgenesis there may be no simple gene mutation to find. It would be helpful if we could find a mutation that causes the pectinate ligaments’ failure to separate into the finger structure. That would help us reduce, but not eliminate, glaucoma in the breed. Would breeders pay for a test that only reduced the incidence? The current test, and the one used in Europe, is Gonioscopy. This allows the ophthalmologist to view the pectinate ligaments and the iridocorneal angle and determine the amount of pectinate ligament closure as well as the drainage angle. Gonioscopy is valuable for information and can aide in making wise breeding choices. Dr. Gavin Kennard, DVM DAVCO recommends that the dog be at least a year old before doing the gonioscopic exam as it may not be possible to see all elements that should be examined before then. One problem with Gonioscopy is that it is very technique dependent and frequently the results are under-read (i.e., the actual results are worse than reported by the ophthalmologist). The better diagnostic aide is ultrasound but this is not practical as it requires the dog be under anesthesia. Europe has been doing Gonioscopy (it is required before breeding in Samoyeds) for a long time but it is difficult to tell if there truly has been a decrease in the incidence. It is very difficult to track change on a very low incidence disease with less than accurate reporting (particularly the failure to accurately identify the cause). If this test was well-utilized by breeders it could help reduce the incidence of glaucoma but it is not a black or white situation. There are dogs with pectinate ligament dysplasia and narrow iridocorneal angle that will never develop glaucoma. Perhaps their eye is large and allows more room for the lens to grow without compromising the size of the anterior chamber or perhaps their lens is smaller and doesn’t grow large enough to cause the iris to deform and close off the draining. If the test were used to improve breeding choices so that a dog with ligament dysplasia and/or narrow angle was not bred to another with the same issue but instead was bred to one with open angle it could improve the incidence in the breed. The impact to the breed if this test was used to eliminate all dogs with partial ligament closure or narrow angles could be very detrimental. This could lend to a huge loss of genetic material. Gonioscopy should also be done on the good eye of a dog recently diagnosed with glaucoma to help with the prognosis for that individual dog.

The first treatment option is medications such as dorzolamide and latanoprost, which stabilize the IOP. If there is sight in the eye maintaining the pressure at acceptable levels is the goal. If there is no sight, and the pressure is not stable it may be possible to do ciliary ablation (injection of a drug that is toxic to the ciliary body) to eliminate the production of aqueous humor or the eye can be removed. The median time from the first eyes involvement to the second eye is 8 months. With the use of the medications that has been extended to 3.5 years. The medication will start to show slippage (the IOP will begin to rise) before full failure, allowing for other treatment to be implemented before an acute event occurs with potential sight loss. Medication can be used to delay the onset or prevent glaucoma in dogs that are at high risk. The current CERF exam will not identify dogs that are at risk and Gonioscopy will need to be done.

The use of cannabis for glaucoma in dogs is questionable. Glaucoma in dogs is very different than in human and, so far, research has not shown any helpful effects. Canines have more receptors for cannabis than humans and can overdose so caution is needed.

Surgery may be the next step in treatment when medication is not working. The current surgery frequently done is endolaser cyclophotocoagulation (ECP) laser surgery. A laser beam selectively destroys some of the ciliary body which produce aqueous humor. This is not a cure but a way to slow progression when the drugs fail. ECP will usually also involve removing and replacing the lens. It is very complex and expensive and there is very little information on the success rate as it is a newer treatment. It should not be done if the medications are working as it carries serious risks. Another surgery frequently done is placing a separate drain to aid in removing the fluid from the eye but this frequently clogs within a year or so. The placing of the drain is often done in conjunction with ECP.

A potential treatment that has been done in some human cases but has not yet been used in veterinary medicine is the replacement of the lens with a smaller lens. This would probably only be useful with dogs where there is adequate overall drainage and before an acute attack caused the iridocorneal canal to narrow. There is danger that such a procedure to prevent glaucoma could actually cause it as any inflammation can cause glaucoma. Surgery always runs the risk of the inflammation causing glaucoma. Gavin Kennard, DVM DACVO is a glaucoma specialist and he does not recommend you do cataract surgery, just to prevent your dog with cataracts from developing glaucoma (yes, cataracts can cause glaucoma). Dr. Kennard also pointed out that all glaucoma in dogs is closed angle after an acute event with elevated pressure because that closes the angle.

Glaucoma is a very painful condition and is difficult and expensive to treat and manage. The older the dog is at onset the better as medical management will usually fail after some time and in an older dog that might mean they make it through all of their life without requiring more invasive treatment. If you have a Samoyed with glaucoma you need to observe them closely as changes in behavior can be your only clue to them being in pain. Even when everything fails and all sight is lost I believe most dogs can still be perfectly happy and loss of sight is not a reason to euthanize. That is just my opinion which is backed by work with blind and deaf dogs as a behaviorist.

(Many thanks to Dr. Gavin Kennard for answering my dozens of questions and providing so much information on glaucoma in canines).

Most of my research used scholarly articles that are not openly available on the internet.

The following are websites that may be useful for further information:

and this group recommends the following two books: